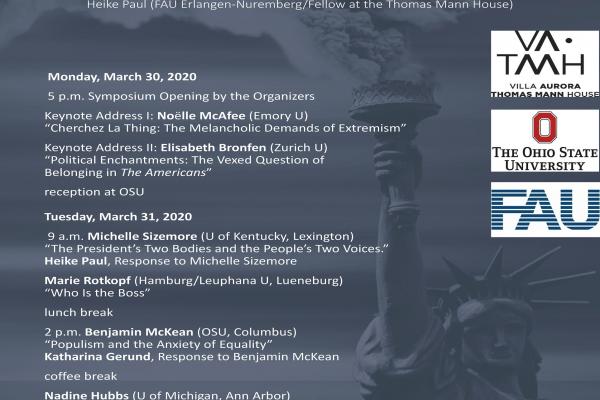 This symposium takes up the broad notion of “enchantment” and “disenchantment” (referencing both, affective and spiritual aspects) with regard to the present moment in which we are assessing the state of democratic orders in cultural imaginaries on both sides of the Atlantic with a view to scenarios of crisis/loss and relief/repair. Turning to the “political unconscious” (cf. Jameson’s term in MacAfee) as well as to the cultural work of representations and cultural practices, we are questioning some of the dichotomies structuring current discussions, among them that of cosmopolitan cities vs. the “heartland.” We are also paying close attention to phenomena of “public feeling” as expression of individual and collective emotional repertoires, culture-specific “feeling rules” (Hochschild), and as characterized by implicit regimes of emotional habitus (Bourdieu, Gould) in order to further complicate influential notions of a ‘rational’ public sphere or and of an enlightenment discourse having ‘produced’ liberal democracy.

Over two days, our symposium will gather speakers from the US and Germany to address democratic culture and its discontent in the present moment (which often reveals itself in expressions of emotion and affect, such as anger, mourning, resentment, indignation, and rage); to historicize the role of affect and feeling in the history of Western democracies; and to develop new perspectives on questions of inclusion and exclusion in social, political, and cultural imaginaries. In times of strained ‘official’ transatlantic relations and right-wing populist successes on both sides of the Atlantic, this symposium seeks to identify common ground and shared concerns in working through the current moment of crisis.

Schedule of the symposium: