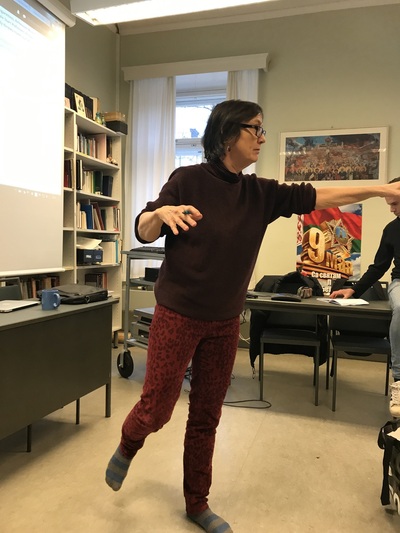 Professor & Director of the Center for Folklore Studies

Katherine Borland is the Director and Graduate Studies Advisor at the Center for Folklore Studies, and Associate Professor in the Department of Comparative Studies.

She studies and teaches about the artfulness of ordinary life, and the ways in which traditional expressive arenas constitute contested terrain. In 2013, she published International Volunteer Tourism: Critical Reflections on Good Works in Central America (co-edited with Abigail E. Adams, Palgrave).  Subsequently, she has published a number of essays on a range of subjects in narrative research, service-learning models, diverse environmentalism, and interrogating race in folklore and in the folklore classroom.

In her teaching she works to develop and hone student’s interpretive, synthesizing and analytic skills through shared inquiry, team research and writing.  She is a passionate advocate of both experiential and discussion-based pedagogies.

Interview with Beatrice Hanson (12/1986) by Katherine Borland. The audiofile reproduces the racetrack story upon which the article, "'That's Not What I Said': Interpretive Conflict in Oral Narrative Research," is based [Women's Words: The Feminist Practice of Oral History, pp. 63-76.  Eds. Sherna Berger Gluck and Daphne Patai.  New York: Routledge, 1992].  A transcript of the narrative is available in "Horsing Around with the Frame: The Negotiation of Meaning in Women's Verbal Performance," Praxis (Spring 1990): 83-107.

https://u.osu.edu/bethestreet/ Be the Street is a Performance Studies Project, originally on human mobility and placemaking.  Now entering it's fourth and final year, the project is exploring how training in theatre-based pedagogy can assist grassroots community workers in building cohorts and coalitions across the city of Columbus. Researchers Borland and Moriah Flagler are experimentally constructing ethical exit strategies for University-Community collaborations.